John Knapp devoted much of his adult life to teaching Virginians and the Commonwealth’s policymakers about their state, its economy, and the uniqueness of each of its regions.

“He really was for many years the leading authority on details about the economy of Virginia’s regions,” said Bob Brickhouse, former writer and editor with the UVA News Office and a good friend and colleague of Knapp’s for close to 40 years. 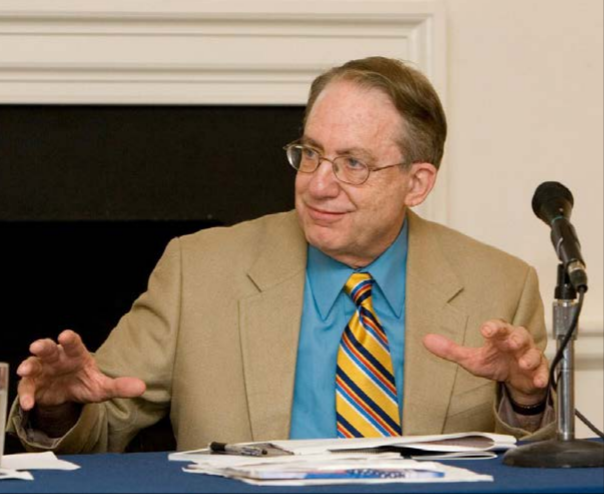 “I first knew John around 1980 when I was a newspaper reporter and had heard that there was an economist at the University who could explain many surprising details about Virginia businesses and economy. He turned out to be a wonderful person to interview, but then he surprised me even more by suddenly offering some tips on careful shopping,” Brickhouse said. “With John, you always came away learning something new and surprising.”

Knapp, 83, died on November 16 after a distinguished career as an economist and public finance expert in state government and at the University of Virginia, where he joined the faculty in 1973. He became a leading authority on business, the economy, and public policy in the state and its regions. His studies and reports were meticulously done and the whole state relied on them.

Knapp served on many state advisory commissions and on the Virginia Governor’s Advisory Board of Economists. As director of economics research at the Cooper Center for Public Service, he led many studies of Virginia’s taxes, finance, and economic health, often focusing on important differences among the state’s regions and cities.

After he retired from full-time work, as a professor emeritus he took on the editorship of the Virginia News Letter, the University’s public policy report. He was the seventh editor of the publication since its first issue in 1925, following Wilson Gee, Weldon Cooper, Clifton McCleskey, Dolph Norton, Sandra Wiley, and Bill Wood.

As an editor, Knapp had an eye for detail and a penchant for pursuing the public good. “He sought out scholarly articles from experts on everything from Virginia’s railroad needs to the effects of climate change to election gerrymandering,” Brickhouse noted. “I think he believed that if everyone only had accurate facts, our government and we as citizens would make good decisions. So maybe John was a bit of a Pollyanna.”

Sandra Wiley said the choice of Knapp as editor of the Virginia News Letter was natural and fitting. “When John called to tell me that he had agreed to become the seventh editor of the Virginia News Letter, I thought it was the perfect capstone for his remarkable career. John had been a long-time, dedicated reader, and I knew that he would continue to seek out the same great breadth of topics for which the News Letter was known— what founding editor Wilson Gee called simply ‘Know Virginia.’ Also, John would be assuming the position held for many years by Weldon Cooper, a legendary figure himself in Virginia public affairs and the namesake of the organization that had been John’s professional home for around 30 years.”

“In thinking about John and the News Letter, I went back and found this statement from an old News Letter article,” Wiley said. The 1957 article by Robert W. Paterson noted: “It seems to me that the News Letter has had a hand, a pioneering hand, in the present business, social, and political climate of the State. It has contributed much to the gradually awakened interest of Virginians in the problems of the State. It has accentuated the opportunities that remain for the young people of the State to grasp.”

“That,” Wiley concluded, “sums up John’s own career as well. He was a first-rate scholar and a devoted public servant.”

Copyright ©2018 by the Rector and Visitors of the University of Virginia. The views expressed are those of the author and not the official position of the Cooper Center or the University